Tell Me How To Get To Sesame Street: Part 1

It was 5am, half asleep I was plopped into my bellbottoms and hurried downstairs to a warming car in the driveway, my mom at the wheel. We sped briskly through the still pitch black neighborhood, leaves scattering to the side of the road as we headed to the train station for the 5:15. It was the early 70’s, back then there were no fancy stations with elevated platforms, just the one man ticket booth, and a path to a small clearing of rocks on the side of the tracks. My dad and I stood huddled along with a handful of stockbrokers, early risers, and white-collar suits making their way into the city.

After being hoisted up into the train by the well-appointed conductor we made the hour-long commute into Penn Station only to be followed by an unpleasant jaunt on the 1 train up to 80th & Broadway. I stood unphased by rats darting across the tracks like the flurry of leaves on our way to the train as the graffiti-littered subway cars rolled into the station. The smell of urine filled the air as we scurried out of the station heel to toe with my dad. It was a far cry from the peaceful suburban life I was transported from just an hour earlier but by this time it was all to familiar. As we exited to street level up to the seemingly never-ending staircase, the sun hit my face and the crisp cool air cleared my nose from the smell of the subway. 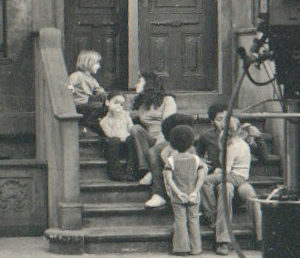 There it was, NYC in the 70’s. The trash-lined curbs and yellow checkered cabs, you know, the ones that had those rounded roofs and fenders like you’d see in the “old days” seemed to take over the streets. The crime-ridden neighborhoods outnumbered the few places you’d feel safe to walk in past dark. Times Square was still littered with X-rated billboards and the smog seemed to weave its way through the streets searching for its next victim. But this was the upper-west side and we were just steps from a world free of the garbage, crime, and pornography. A magical place that only existed on television for many, but for me, it was all very real. However, in this made-up world it wasn’t the muppets or the big yellow bird or the treelined imaginary street that drew my attention and sparked my imagination, it was the dark control room with the black-and-white flickering monitors with the endless array of nobs, switches, sliders, and do-dads that would make it impossible for any five-year-old to keep his hands to himself. It was the “morning!” from the AD with the half-smoked cigarette dangling from his lips as my father did his morning hellos and that big table of donuts and coffee where the cast and crew huddled impatiently awaiting their first call time. This was Sesame Street on 81st street circa 1970 and it was the beginning of my love of television production.

Part one of Rob Rauffer’s “The Sesame Street Chronicles”, a behind-the-scenes glimpse of television production from the eyes of a child actor.

Rob joined the original cast of Sesame Street in 1970 and was a semi-regular for seven seasons (1970 to 1977). He was part of the cast that appeared on TV stations around the world. Because of his father’s position as Technical Engineer, he got a true behind-the-scenes look into an industry that he has embraced his entire life.